The land the Bob Moore designed classic now flows across was once nothing more than dunes and ponds owned by a single family. Since its 1980s transformation into a near Scottish links replica, four holes still play hard along the Roanoke Sound – something that would be impossible to replicate these days. Thanks to some thoughtful developer vision, Nags Head Golf Links has continued to evolve into the truly unique display of golf it is today.

“Sure, they could have just put houses here (along the water), but went with the golf course instead,” said Nags Head General Manager Patrick Kelly. “It’s obviously prime real estate.”

Indeed it is. So as a tribute to this honorable effort – and despite a good many other outstanding holes to choose from – the four holes along the water (Roanoke Sound) earn our distinction as members of the OBX’s Dream Team.

Kelly went on to say that the weather (I played it with a tropical depression hanging about off shore) plays a big part in the layout’s demeanor.

“This kind of weather brings out the style of the golf course,” he said.

Water, wetlands and dense undergrowth off the fairways present challenges throughout the golf course. Once out there, the first glimpse of the Roanoke Sound is actually from the tee box on hole No. 4. But it is a hole later where you truly begin to feel its awe-inspiring presence.

The tee shot is critical as you have to hit over scrubby grasses in the foreground and either over or left of a cluster of five live oaks (a native tree to the Outer Banks) that guard the right. Although the fairway ahead looks very narrow, it really isn’t, though the next shot gives way to a layup to a spit of land that surely is. More oaks line the entire fairway up the right side.

With the Sound far left and a pond creeping in from the left, my left-center cut drive is followed by layup that just bleeds into the high grass next to the pond. A punch out later, I strike an approach shot to the safe right side of the green, as the right side sports a picturesque bulkhead as it juts out into the Roanoke Sound. A nice chip from the right side can’t quite save my bogey. Double.

Considered slightly easier than No. 5 in terms of handicap on the scorecard, this same South-to-North running hole, however, puts even more of a premium on the tee shot (especially into the East wind) as a blind shot over high scrub has to hit the narrowest fairway of all the four Sound-side holes. This landing area is perched between the water and Clubhouse, but once reached, leaves a reasonably short shot over a mound to the green. I always seem to have trouble threading the needle here. Today is no exception. 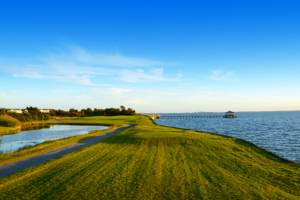 As you continue along playing the inland holes at Nags Head, it’s hard not to think ahead to what’s ahead in your round. You get a glimpse of it from the green at No. 14, but when you step back to the tips on the next hole, its scary demeanor takes hold. Of course, I don’t actually tee up from there, but even one tee box forward the one-shotter requires a monster smack over a pond on the left and the Sound flowing down the entire right side.

Both this hole and eventually No. 18 now have you playing North to South, so the wind is opposite of whatever you played on the first two Roanoke holes. Fortunately, I catch a break on this day, and though my tee shot falls short of the green, it’s still past the pond and well away from the watery graveyard on the right. A thinned chip shot and a nice two-putt from off the back of the green saves a bogey.

Here’s a hole that will stick with you for a long time. Then again, the entire closing stretch of holes 15-18 leaves a lasting impression – possibly my favorite stretch of gaming grounds in all of OBX if not all of North Carolina’s famed links.

For the slicer, the tee shot at 18 can be daunting with the Sound dangerously close on the right. But the fairway spreads out wide to the left, so a play down the center left is ideal. Having done that, the real test begins. From there, the fairway narrows dramatically with scrub grasses to the right leading to a Sound-side beach and more gulps of Roanoke water. An unfortunate bounce right beats me up here, but once past that, the main obstacle to deal with is a deep bunker framed by grassy rough and flanked by two trees on the left front of the green. The bad carom had me hacking a wedge out of the beach grass, but once extracted, I make my way onto the undulating carpet in one over regulation. Looking back, No. 18 is truly a beast of North Carolina’s extreme Northeast.

After your round, take the time to go up into the clubhouse’s crow’s nest. The 360-degrees views of the Links (including all the holes just detailed), the Sound, the Atlantic Ocean and Nags Head proper are nothing short of amazing.