The Great 18 – A full-course menu of OBX’s most daring and delightful golf holes … Bank on It.

The adrenaline rush kicked in somewhere along the road between the coin dispenser and Coinjock.

If it wasn’t for the barbeque sandwich, fries, Southern sweet tea and $1.79 oversized sugar cookie consumed at The Border Station straddling the North Carolina/Virginia state line, I would have sworn it was the anticipation of playing 18 of the most memorable golf holes North Carolina’s Outer Banks has to offer. As it was, the drive southbound from Virginia to the coastal resort was remarkably energizing.

The mission … if I chose to accept it? To find, play and experience each of these 18 offerings individually, from tee to shining green. Then string them together providing a few insights.

The inspiration for this particular travelogue was a 1993 novel co-authored by journalists Tom Callahan and Dave Kindred titled Around the World in 18 Holes. After “months of absurdly complex planning,” the twosome spanned the globe playing the game across 18 diabolical golf holes then pieced them together to make a single 18-hole golf course. It was a par 72 at a length of 37,000 miles. The 69-day adventure was no doubt a dream journey for them – but one that will likely remain a literary fantasy for the rest of us.

Still, this doesn’t mean we can’t score a dream 18 of our own using a beloved destination like the Outer Banks of North Carolina. So, with the pair of golfing globe trotters in mind, I came up with a journey anyone with some coastal golf aspirations can enjoy: Around OBX in 18 Holes. The goal here, however, was not to necessarily find the most diabolical holes across the barrier island landscape. More, it was to find the ones that give a flavor of their respective designs; shining the spotlight on those that are indisputably daring, delightful and most of all, hard to forget.

Applying this concept to an excellent array of half a dozen golf courses OBX has to offer – all fairly close together – was easy. With some simple planning that included a few correspondences to PlayOBXGolf.com and insights from several area golf directors/pros, the concept came together.

I spent several days (well, mostly just nights) staying at the Ballesteros golf cottage at Kilmarlic Golf Club and golfing along the northern coast of the Tar Heel State (not to mention refueling at OBX local dining hot spots like Shipwrecks, Henry’s, the Bonzer Shack and of course breakfast at Kilmarlic’s Black Tartan Tap Room). Here is what my local hosts helped me come up with. 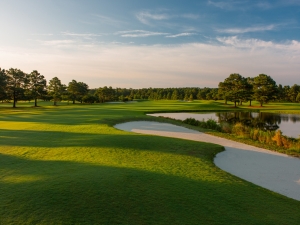 Director of Golf Doug Kinser loves the expression, “The Wright Brothers chose this area for a reason.” And he’s right, the greatest defense The Pointe possesses on any given day is the wind. On a rare calm day, the layout that prides itself on great turf conditions and playability is extremely getable. To illustrate, the club’s head instructor Cory Schneider – within a month of qualification for the PGA Championship at Bethpage Black – actually shot a course record 59 at The Pointe. A few months after that, he lowered it again to 58.

But days like that are rare, especially in breezy OBX. The real story at The Pointe, however, is the aforementioned turf conditions. It’s true, the facility was the first course in the nation (it opened in July 1995) to fully utilize A-1 bentgrass across its fairways, roughs and greens. You can find the same stuff on the greens at Augusta National, home of The Masters. Routed on a former turf farm and designed by “old-school, seat-of-a-tractor” designer Russell Breeden, the layout is plush, built for speed of play, not overly long at 6,226 yards, sports a par of 71 and is a favorite of the locals.

You know there’s something special about to pop when the cart path takes you up to the top of a 30-foot incline. From there you get a bird’s-eye view of the Currituck Sound as it drifts down the coast buffered by natural wetlands in the foreground. It is a wonderful view to begin an equally enthralling hole.

The actual championship tee sits between two ponds and some scrubby pines, but on this day I catch a double break as the tips are moved a box ahead and a ferocious Easterly wind is at my back. A slightly pulled drive down the left side flirts with the environmental hazard (and away from a fairway bunker on the right), but provides me with a nice angle into the green with more water trouble on the right.

This hole requires two big hits to reach the putting surface that tilts left to right towards the water. The prudent play here, if you are not going to hit the green in regulation, is down the left side where the only real challenge is hitting off the down or upslope of any one of handful of harmless mounds. Just don’t skull your ball from there as I did, or it will careen off down the slope (the green slopes to the right) into the pond protecting the right side – a result you intended to avoid in the first place.

Stepping onto the back tee box, it’s hard not to feel temporarily claustrophobic. That’s because The Pointe, known for its generally fun and forgiving layout (“It’s hard to find a hole that will tighten you up here,” says Kinser), suddenly puts the squeeze into you a bit here. The tee shot at 12 requires a carry through a narrow chute of trees and across a 150-yard-deep environmental hazard.

After a piped drive down slightly right of center, I could take a deep breath before taking off in the golf cart across a wooden cart bridge and back out into the open. From there, I am left with 150-yard approach to a wide green. Along the way, there is a fairway bunker on the right to avoid along with two green-guarding bunkers in the middle and left front. To add to the appeal of the 12th are five bear-claw shaped mounds that line up behind and around to the right of the green.

The original back tee box on this hole played well over 600 yards, making it the longest one in OBX. For speed of play, the big-hitter tees are no longer placed there, but I was allowed to try it from the former and monstrous 619-yard distance. After pounding a drive that barely made it past the forward tee box and short of the fairway, I hit three wood then five wood to 40 yards short of the green but in front of one of the two bunkers that protect the left flank.

Along the way, I avoided water down the right side along with fairways bunkers both left and right. My “layup” saw me pitch past the pin to a long, sloping back to front sloping green. Two putts later and I walked away with a satisfying double bogey. If nothing else, the thrilling experience on 18 at The Pointe reminded me why I should be moving up tee boxes … not back. This is especially true when playing it into a dreaded East wind.